What to Expect - The Weddell Sea
Enter the Weddell Sea, a frozen world of magic and wonder, where vast tabular icebergs take your breath away, krill-rich waters support emperor penguins and Adélie penguin colonies a hundred thousand strong. Where world-renowned fossil fields mark Antarctica’s last connection with other continents and the greatest stories of polar survival have been born. With good reason.
Nearly half the Weddell Sea is covered by the massive, floating, Filchner-Ronne Ice Shelf, the second largest in Antarctica, and smaller ice shelves along the east coast of the Antarctic Peninsula. These ice shelves calve huge, flat-topped icebergs some 30 metres above sea level, 120 metres below and many kilometres long. Powered by deep currents, they slice through fields of frozen sea ice, like icebreakers of the gods.
It takes a unique ship to explore these waters and Scenic Eclipse, The World’s First Discovery Yachts™, is in a class of its own. The first to be designed and built to Polar Class 6 standards, its strengthened hull, forward bow thrusters and electronic Azipod propulsion system enables safe navigation. Our specialist polar Discovery Team share their insights into the environment and history of the region, and their expertise allows us to land in places few others have been before.

Most have heard the Shackleton story, how his ship Endurance was trapped and crushed in Weddell Sea pack ice, how he and his men escaped to Elephant Island in lifeboats, and how Shackleton and five others sailed from there, to South Georgia, on an epic rescue mission.
But who knows the drama of Otto Nordenskjold’s Swedish Antarctic Expedition more than a decade earlier? Your Discovery Team historian will share the gripping tale of how Nordenskjold lost his support ship Antarctica to pack ice and how this set-in train a series of events combining the hardship, coincidence, sheer good luck and leadership that brought all but one of his men back alive.
Whether by Zodiac or helicopter^, we aim to visit Nordenskjold’s Hut on Snow Hill Island and look for birds recently departed from the northernmost emperor penguin colony nearby. On adjacent Seymour Island, known as the Rosetta Stone of Antarctic palaeontology, scientists have discovered fossils of giant penguins, marsupials and evidence of the mass extinction event that wiped out the dinosaurs.

We’ll search for ephemeral waterfalls on Vega Island, perhaps visit an abandoned British field camp in Duse Bay, and attempt to land on volcanic Paulet Island, home to 100,000 breeding pairs of Adélies and the remains of Larsen’s Hut, built in1903 by the survivors of Antarctica.
Explore above, below and beyond the horizon. Our two helicopters^ provide new perspectives on tabular icebergs, the Antarctic Peninsula’s icecap and access to remote fossil fields. Our custom-built submarine, Scenic Neptune^, enables you to explore the depths of the Weddell Sea where no one else has been. Who knows, there may still be relics of Nordenskjold’s and Shackleton’s lost ships somewhere on the sea floor.

Back on board Scenic Eclipse, visit our expansive 550sqm Senses Spa for the pure indulgence of rejuvenating treatments, soak in our Vitality Spa or outdoor pool, or stretch tightening muscles in our gym, or POWER Yoga and Pilates studio. Join your Discovery Leader for an illustrated recap of the day and learn what is planned for the next.
After dinner, what better way to finish the day than with a nightcap in one of our nine bars and lounges, admiring evening light playing across the Weddell Sea Ice Factory outside. 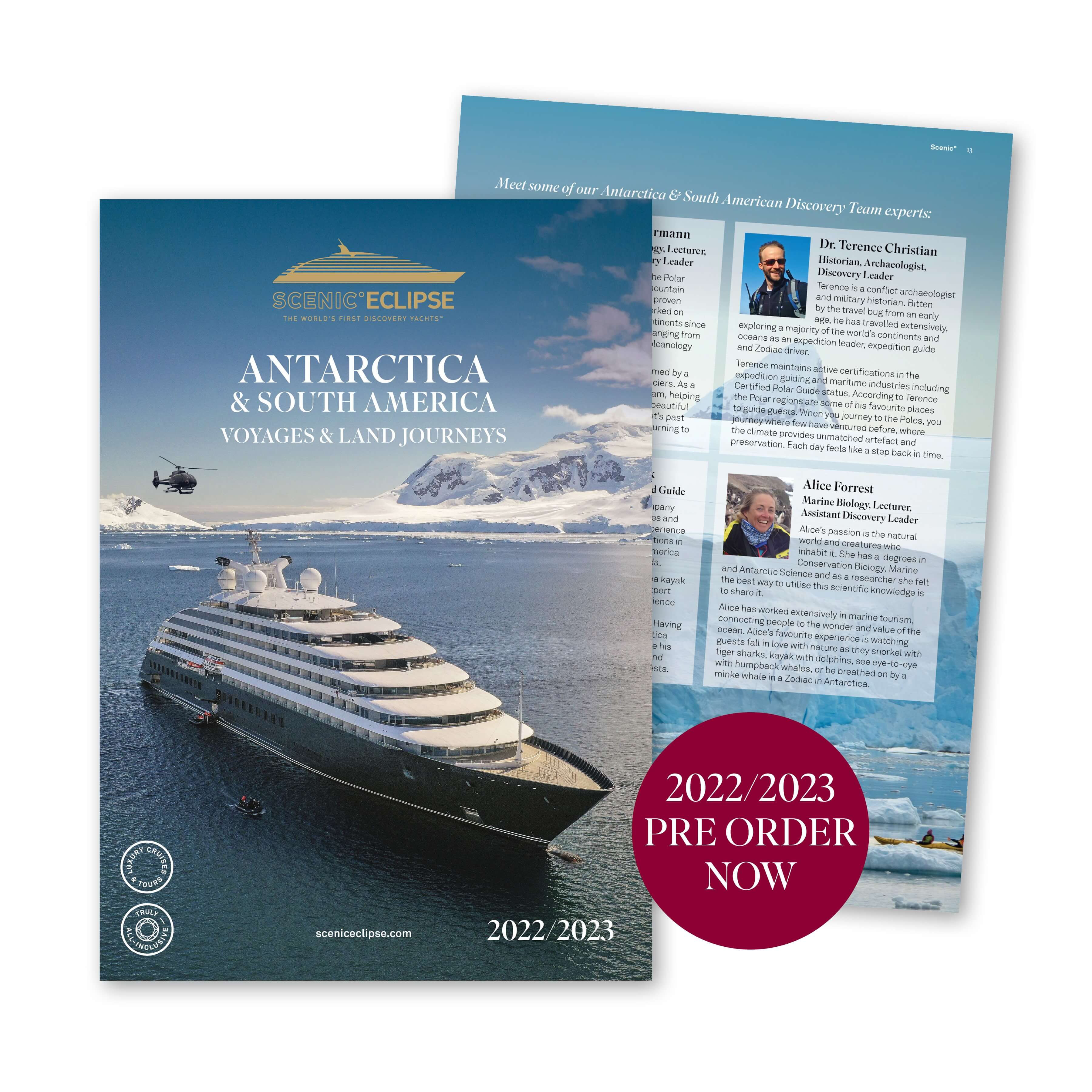 Lands of pristine beauty, breathtaking wildlife and inestimable importance in an environmental and historical sense, travelling to the base of the globe on our Antarctica cruises is a long-held dream for most people.

Scenic Eclipse sets the standard in ocean cruising in terms of technology, size and luxury. State-of-the-art safety features allow us to unlock destinations others can only dream of.