Navigate through in 6-star ultra-luxury on board Scenic Eclipse and discover some of the world’s best cruising regions in Canada’s Northwest Passage and Alaska’s Inside Passage.

Explore UNESCO World Heritage listed Disko Bay, here massive icebergs calved from Sermeq Kujalleq, the world’s fastest and most active glacier, fill Illulissat Icefjord with grinding ice castles. Sail from Greenland to Baffin Island, where the Northwest Passage begins, enjoying on board lectures from our expert Discovery Team, to give you a deeper understanding of what lies ahead. Learn of the life and culture of the Inuits you’ll meet and the wildlife you’ll encounter, from puffins to guillemots, narwhals to beluga whales, walrus to polar bears.

Listen as our Discovery historians recount tales of tragedy and triumph in the epic struggle to find a sea route from Europe to the Orient. How Captain Cook, John Ross and John Franklin joined the pantheon of those that tried and failed, before Robert McClure and Roald Amundsen successfully passed through, stories that become more poignant as we visit campsites and graves of those who never returned.

Adjust your eyes to the breathtaking scale of Baffin Island at Pond Inlet, built by Inuit ancestors a thousand years ago. Zodiac cruise, stand-up paddle board or kayak Croker Bay, Devon Island, the largest uninhabited island on Earth, against a backdrop of a vast glacier front flowing down from the island’s exclusive ice cap. Watch out for polar bears, sometimes seen swimming in the bay. Visit nearby Beechey Island, one of Canada’s most important historic sites, where the ill-fated 1845 Franklin Expedition wintered over and laid to rest three of his crew.

Across Lancaster Sound, ship-cruise beneath spectacular 265-metre-high limestone cliffs of the Prince Leopold Island Migratory Bird Sanctuary. Train your in-suite binoculars to the home of half a million nesting birds, including thick-billed murres, northern fulmars and black-legged kittiwakes.

Delight in wonders found nowhere else on Earth, like dozens of beluga whales shedding skin on sand banks of Cunningham Inlet, narwhals chasing Arctic char and polar bears feasting on belugas trapped in the rocky shallows of Coningham Bay, Prince of Wales Island.

Be fascinated by the ‘Copper Inuit’ of Holman, Victoria Island, so named for their traditional use of copper to make ulu, the half-moon shaped knife used in food and clothing production and delight in local art and drum-dance performances across the Canadian Arctic.

Wonder at the Cold War politics of Little and Big Diomedes islands as you transit Bering Strait en route to Nome, where Unlocking the Northwest Passage ends, and Adventures through the Inside Passage begins. Combine the two voyages for a trip of a lifetime.

The Inside Passage straddles both seabird and whale migration routes, and every day offers the chance to view spectacular creatures, from tufted puffins to feeding humpbacks and salmon runs.

Volcanic St Paul Island, in the Bering Sea, is home to seafaring Aleut, a massive seal rookery and at least 310 bird species including rare Siberian visitors. Walk the streets of Dutch Harbour, Alaska’s most renowned fishing port and, aside from Pearl Harbour, the only place on American soil to be attacked by the Japanese during World War II.

Thrill to encounters with Kodiak brown bears fishing for salmon in Kodiak National Wildlife Refuge against a backdrop of dramatic, snow-covered mountains. Visit Hubbard Glacier, North America’s largest tidewater Glacier, to observe the power of one of the Pacific Northwest’s most famous calving glaciers.

Hike trails through spruce forests, and at Kake, meet Tlingit people keen to share their culture and traditions, and explain the significance of their unique totem poles. In Wrangell, the heart of the Inside Passage, admire ancient rock carvings at Petroglyph Beach and delight in a walk through Tongass Rainforest.

As Scenic Eclipse continues south along the coast of British Columbia, keep watch for pods of orcas, dolphins, and humpbacks as you reflect on the magical experience you’ve enjoyed and the memories you’ll carry back home. 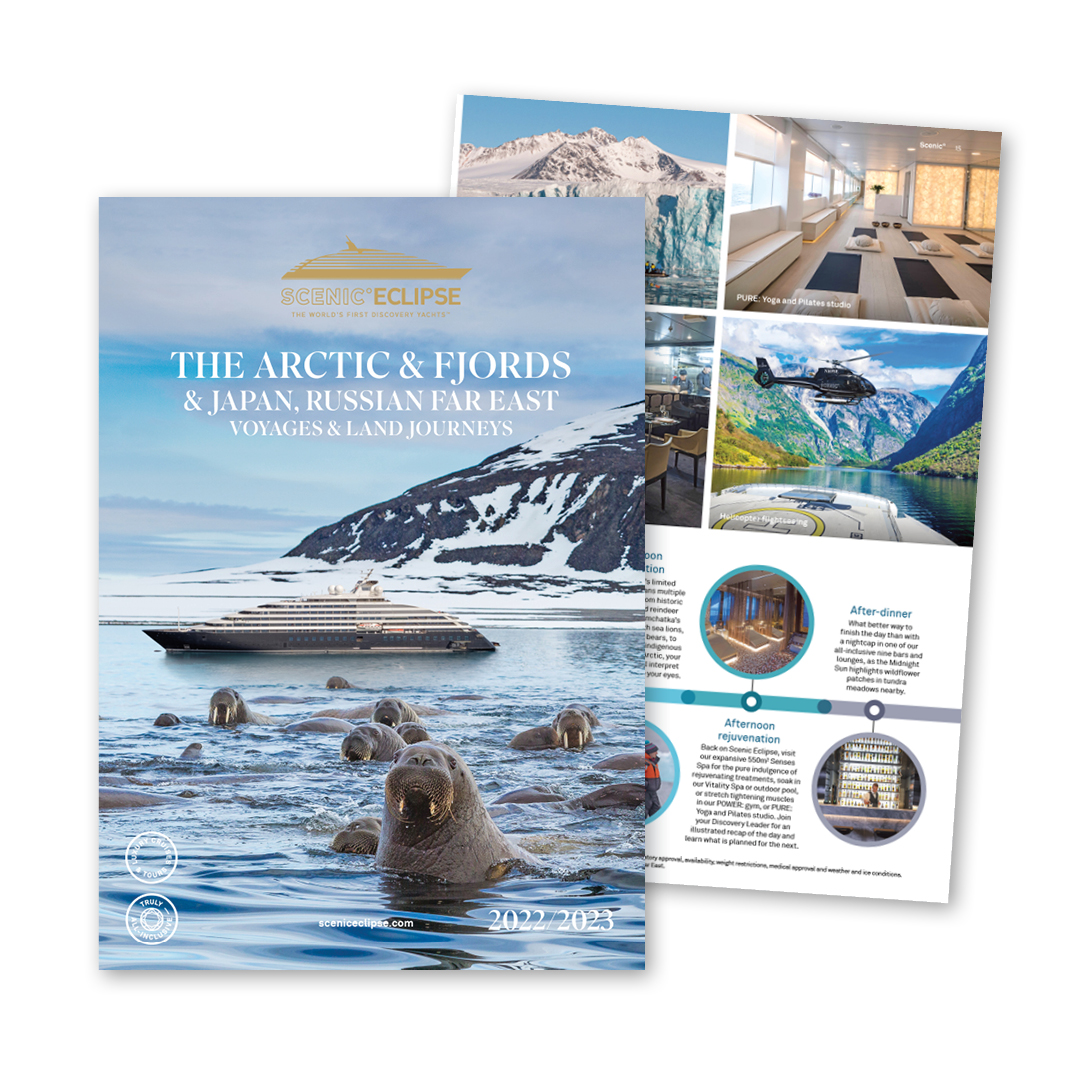