What can you expect at this celebration of all things green?

14 April - 9 October 2022
Floriade is a horticultural highlight, held just once a decade. In 2022, for the seventh iteration of the expo, nature lovers and the sustainability-inclined will be heading to Almere, a modern 'garden city' close to Amsterdam.
Running from April to October, Floriade Expo 2022 will include an extensive number of exhibits and events, with the theme of ‘Growing Green Cities’, encompassing green, food, energy and health. It’s a critical issue given that by 2050, almost 70% of the global population will live in cities on just 2% of the earth’s surface area. With this in mind, Floriade has promised that almost all new buildings created for the Expo will have a continued use in the future as a new city district in Almere named Hortus.

What can you see and experience at Floriade 2022?

Floriade will bring to life a technicolor tapestry of trees, plants, crops and flowers from across the globe, each representing new technologies and sustainability. Stroll the expansive arboretum, sample health-promoting foods and learn about recent developments and blue-sky dreaming in sustainable architecture and energy. Themed exhibits, art, live entertainment and culinary treats add to the festivities to make your visit here a highlight of your trip – and the perfect add-on to your Scenic Europe River cruise.
Visitors will be able to take in the stunning views from above by a cable car running over the exhibition. The 850-metre cable car will enable fast and sustainable connections between each end of the Floriade park.
The Dutch and more than 40 other countries will exhibit green solutions that we may find part of our everyday life in the future. The aforementioned arboretum will feature an alphabetically organised tree and plant encyclopedia that you can walk through.
Green bridges and circular infrastructure are essential for tomorrow’s green cities. The Bridge Campus Flevoland will display two bridges during the expo constructed from waste flows from Almere.
Floriade will be an extraordinary experience in 2022. 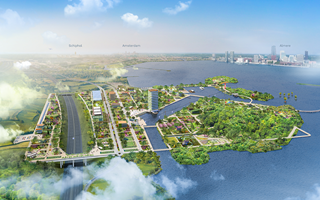 Flowing from Switzerland to the North Sea through six magnificent countries—Switzerland, Austria, France, Germany, Lichtenstein and the Netherlands—the remarkable Rhine River has many tales to tell and enriching experiences to share along its course.